•No zone will be cheated in PDP administration 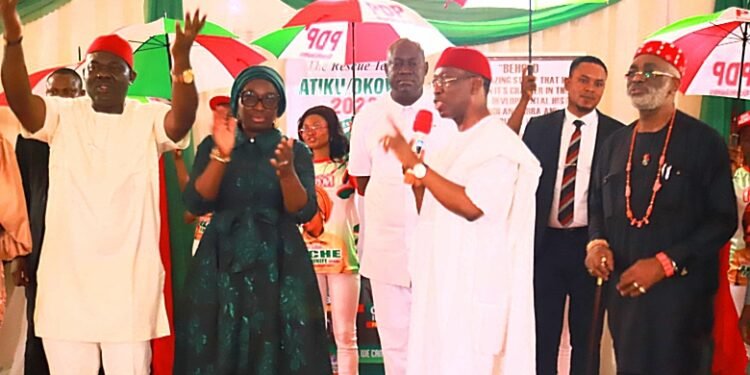 He said that the presidential election in February, 2023 would be won by the PDP “because of the things that I know and I see and whole lot of things going on”.

Governor Ifeanyi Okowa and Vice Presidential Candidate of the Peoples Democratic Party (PDP) on Sunday said he was on the party’s presidential ticket because “it’s God’s will”.

He said the PDP rescue mission for Nigeria was a divine project, and assured that no geopolitical zone in the country would be cheated in a PDP-run Federal Government.

Okowa gave the assurance while addressing PDP stakeholders in Anambra at the Constituency Office of Senator Uche Ekwunife in Awka.

He said that the presidential election in February, 2023 would be won by the PDP “because of the things that I know and I see and whole lot of things going on”.

“Looking at what I am seeing this afternoon, I am worried because both APGA and Labour Party are in trouble.

“I must thank the men and the women here for standing strong for the PDP. The party in Anambra will come out alive and will remain strong .

“I can assure you that actions are being taken to ensure that we do the right thing in Anambra State. Nobody will write off Anambra when you have people like these in the party.

“I know that there is a Presidential candidate from Anambra but I know that Anambra and Ndigbo will play a major role in the next political dispensation as no zone will be left out and no zone will be cheated because we have equal opportunities for all.

“In the last seven years, the South East had not gotten its fair share in this country and we cannot afford to continue in that route.

“When we went to Osun State they never gave us a chance but when the result came we had a very wonderful result.

“By God’s grace we will win that election by a landslide because if God had not endorsed it, He would not have allowed me to be on the ticket,” he said.

“A lot of people are being deceived and when we speak about the need to unite Nigeria people think that we are mistaken.

“I have political wisdom that God gave to me because I understood politics very well and it is not possible to have an accidental President.

“When people talk about Muslim-Muslim ticket am being careful because I don’t want to get involved in religious politics.

“But Nigeria is better off standing united as we are and it behoves on all Nigerians to be on board to dig us out of the pit that the APC has put the country.

“It is for us to stay committed, stay strong to that structure that God has given us to enable us take back power from the ruling party.

“The insecurity and economic challenges facing Nigeria today requires a united people to resolve it.

“Nigeria must work for all with everybody participating in the working and sharing of the dividends and we must work as a team to rescue and redeem Nigeria.

“My principal and I understand all the issues and I can assure you that we have all it takes to bring a fair deal for our people and other parts of the country.

In his welcome remarks, Senator Ben Obi lauded Governor Okowa for always identifying with the PDP in Anambra and for always helping them to resolve issues in the party.

He pledged that the party would reciprocate Okowa’s kind gesture by supporting the Presidential ambition of Atiku Abubakar and Dr Ifeanyi Okowa.

Senator Representing Anambra Central, Senator Uche Ekwunife said the party is formidable in Anambra despite losing out from the last governorship election in the state and assured of the support and goodwill of the people of Anambra to the Atiku-Okowa project.

The Integrity of God’s Word … (vi)