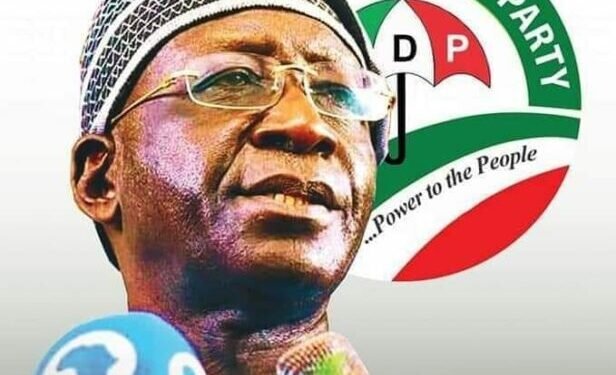 The embattled national chairman of the Peoples Democratic Party (PDP), Dr. Iyorchia Ayu, has for the umpteenth time, been called upon to throw in the towel and allow another member of the party from the southern extraction to pilot the affairs of the Party.

This call is coming as many others from a group of immediate leaders of the party with the name, PDP Rebrand 8 Group with members from senior members of the party from the six geo-political zones in Nigeria.

In a letter requesting the resignation of the chairman addressed to the party`s Board of Trustees, through its chairman, Mr. Walid Jubril, and signed by its national chairman, Prince Benedict Onyewuenyi, they asked Senator Ayu to do the honourable thing by resigning to allow the party to move forward and “To Put An End To Party Divisions And Reputational Disaster”.

The letter, which was sent to PDP: Pressure Piles on Ayu to Quit – critical stakeholders form PR8 Group, write BoT, NEC was also copied the National Secretary of the PDP, National Executive Committee NEC, Governors Wike, Makinde, and others.

It reads in parts;

“We the members of the Peoples Democratic Party Rebrand 8 group on Affiliate arm of the Party had watched with keen interest the lingering and continuous crisis in the leadership circle of the Party and have resolved to weigh in as usual to finding and proffering a possible solution to end the public disaster”.

“As the conveners of the PR8 Group, whose agenda is to make peace and to contribute to rebranding the Party as virile opposition with the aim of building back the confidence of our Party members and Nigerians alike towards winning the 2023 general elections, we do not feel that the internal crisis rocking the Party is hygienic enough especially having suffered as opposition since the past seven and a half years”.

Indeed, the prevailing crisis in our Party has resuscitated the reality that you do not run away from problems, you face them. We should not spank ourselves from what we did not do right and we cannot solve our problems by going about unbagged and ululating, we must move forward.

“The position of the National Chairman of our Party has raised a lot of fray nerves since the Chairman’s public proclamation that he will resign should the Presidential candidate come from the North, especially Atiku Abubakar before the Party’s special National Convention.

“We, therefore, suggest he toes the step of honour to resign and a replacement should be made, going by the rotation of the Chairmanship seat to the South and the Presidential seat to the North as reflected in the Party bye-law”.

It further reads that “the Party controls a formidable structure to win the 2023 General Elections and we do not wish to lose it.

“Therefore, the NEC and the BoT should take the bold step to restore dignity and also the confidence reposed on us by Nigerians to take over from the APC whose government has plunged the country into extreme poverty, hardship and insecurity to the threat of lives and property”.

Concluding, the group opined: “We are confident that this bold step will restore peace, and will also reassure our country’s people that we are the Party to reclaim power come 2023. Let the wish of the people Stand, thank you”.

This group is the 11th of such PDP groups calling for the resignation of the Iyorchia Ayu from the chairmanship position in other to allow for peaceful reconciliation of the warring factions within the party.