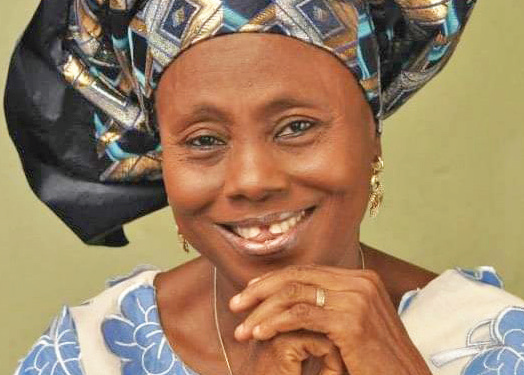 Oji Onoko relives an encounter with one of the last of the old breeds, who passed on early this week
The excitement in her voice that day still echoes in my ears. “It will be a training ground for the young ones that are ready to go into the profession and for those in it who do not know the rudiments of the profession,” she had enthused. She was talking to me at her modest home opposite FESTAC town, Lagos, about her plans to set up a Movie and Media College to cement her legacy. So, are we going to be seeing more of the actress or the teacher?  I had probed further. ”Both” she had replied, a smile playing on her lips. It is a plan that is now frozen in time as the captivating actress took the final curtain call early this week.
Sola Awojobi-Onaiga belonged to the band I refer to as the old breed of actors who criss-crossed the stage, radio and screen with absolute ease. Interestingly, stardom came to her through radio dramas!  It was genre she traversed like a colossus becoming its crowned goddess. As Madam Sikira for instance, in the long running Federal Radio Corporation of Nigeria (FRCN) radio play, Gandu Street (it was on for 10 years) listeners rooted for her. She recalled how a senior officer of the Corporation once invited her to her office. A tough lady, visits to the lady’s office most times meant termination of contracts. There was therefore visible apprehension among the cast of Gandu Street.
On entering the office, however, the matronly lady asked her to sit down. “So you are that Sikira? She began on a friendly note almost doting on her. “Just sit there for five minutes, so I can recast you in my mind.” The actress was stunned. She simply smiled as she acquiesced…
It is a smile she has had to put on several times as total strangers warmly greet her on her daily shuttles. Others merely write to her expressing their delight on her radio drama performances. These include that of Mama Bomboy (Edna) on Radio Nigeria 2 play, Survival Express which ran for years and as presenter of the Musical cuisine programme on Radio Nigeria 3.
On television, she featured almost simultaneously in three Yoruba drama programmes: We gbee, (NTA7) and Oniya Meta on Lagos Television, (LTV8) and as Olori Debomi, the evil-minded schemer of a queen in Oragbala (NTA7).  The roles made her a cult figure among her Yoruba audience.
On stage Sola Awojobi-Onaiga stamped her imprint in Ajo production’s The King Must Dance Naked.  In the play, she performed alongside such household names as Evans Hunter, Ayo Lijadu, Richard Mofe-Damijo and Enebeli Elebuwa.
The part, Mama Odosu required her to portray a flamboyant queen mother. She played the arrogant and overbearing slave turned queen by the king, so well that ”people started calling me Mama Odosu, Mama Odosu after the production,” she recalled. She had earlier earned her stripes on stage through other productions.
Her major break on TV came with Checkmate, her first TV soap opera where she played the part of “a mixture of the Isale Eko bred woman and the highly educated.” It was easy for her to pull off the role having been familiar with such character types during her long stay on Lagos Island. In the hey days of the production, she hardly went anywhere on public transport because of the mob which usually gathered around her shouting her TV name. “I enjoyed the part,” she had said with glee…
It is an experience her father would have denied her. When she collected her university entry form and told him she was going to study Theatre Arts, his reply, as she recalled, was:  ”Is that what you are going to do?” with all the sarcasm he could muster. It took the intervention of her uncle’s wife, Bode, to change the old man’s opposition.
For Sola Awojobi-Onaiga, interest in acting dates back to her childhood days when she enjoyed watching actors on television, and wanting to be like them. It was not until after secondary school that a friend encouraged her to try the Nigerian Television (NTV), now NTA. She was introduced to the producer, of Youth Scene, Babs Fashina, who facilitated her participation in the drama programme’s segment.
On her first day, she fidgeted all over but did not forget to inform all her friends, relations and acquaintances of when the programme would be aired. “I felt on top of the world when I saw it,” she recalled. When the programme went off air less than a year after, she teamed up with Sola Adeyemo, Yinka Ogundaisi and Roland Henshaw among others to form the “Oganization for Young Artistes” where they continued to act, sing and dance. “We were doing it for the interest,” she said. Quite true, for there was hardly any form of remuneration. Even the radio plays she did brought her little material returns. ”It was poor. Very, very poor,” she emphasized.
So how did she survive at the time? You had asked. “May be because I was still living with my uncle (the late Prof. Ayodele Awojobi) who was feeding me, that’s why I did not feel it”, was her reply.
Later productions like Checkmate, Fuji House of Commotion among others paid off and with these, more honors.
So long, queen of radio drama…
Tags: Oji OnokoSola Awojobi-Onaiga