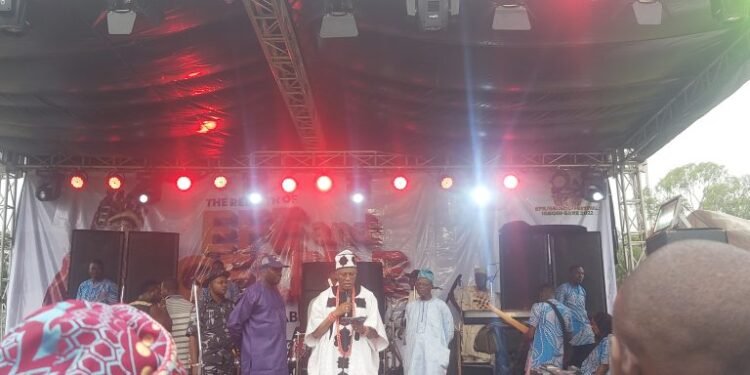 .
By Taiye Olayemi
Oba Owolabi Adeniyi, Onisabe of Igbobi-Sabe, in Lagos State, has relayed the history behind the ancient festival of “Gelede”, performed for over three centuries by the Yoruba communities spread across Nigeria, Benin Republic and Togo.
Adeniyi spoke on the sideline of the celebration of Efe and Gelede festival, held on Sunday, in Lagos.
He noted that the mythological origin of Gelede was directly connected to the “Great Mother” and her connections to motherhood and twins.
According to him, in Yoruba myths, Gelede’s origin can be found in divination narratives known as “Odu-Ifa”, as the “Ese Ifa” explains that the origin of Gelede began wih Yemoja – mother of all “Orisa” and living creatures.
“It happened that Yemoja could not bear children, she consulted an Ifa priest who advised her to offer sacrifices which involved dancing with wooden mask and metal anklets on her feet.
“After the sacrifice, Yemoja became pregnant with her first child being a son, named “Efe”, meaning humourist, who emphasised on songs and jest because of the attribute in the name.
“Yemoja had the second child named “Gelede”, who looked so much like her mother and also loved dancing, years after, the children got married and had similar problem as their mother, neither of them could have children.
“They consulted an Ifa priest who suggested same ritual as their mother, soon after their rituals which involved dancing with wooden mask and metal anklets, they started having children,” he said.
Adeniyi said that the rituals developed into Gelede masked dance and perpetuated by the descendants of Efe and Gelede.
He said that according to the oral tradition, the Ketu people of the Yorubas were credited with the invention of Gelede sometimes in the 18th century.
“What we are trying to do is to boost economic activities within my community through this festival as well as enliven our cultural heritage.
“The theme for the festival, “Cultural Rebirth”, was chosen deliberately because the festival was held 12 years ago, this is coming in a way to revive it and it will continue to hold annually.
“We celebrate womanhood, their unusual strength, resilience and uniqueness as Gelede focuses on womanhood.
“The celebration of Efe and Gelede brings peace and harmony to the community,” he said.
Tags: Efe FestivalGelede FestivalLagos StateTraditional Rulers

By Olajide Idowu   The Palace of Aree of Iree in Boripe North Local Council Development Area of Osun,...