2023: Nnamani Explains ‘Why I Want to be President of Nigeria’ 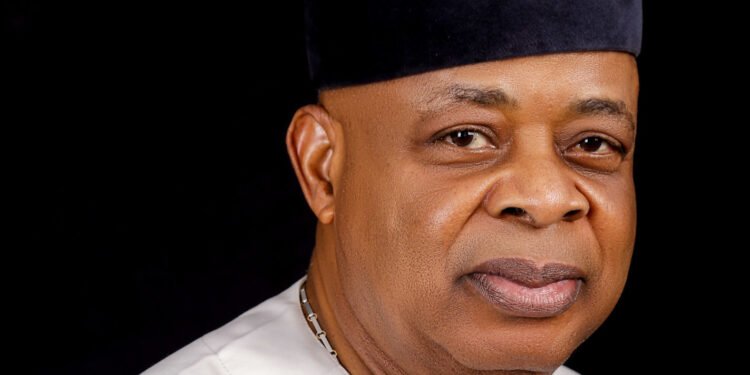 Eminent statesman and former Senate President, Chief Ken Nnamani, has explained why he is seeking to succeed President Muhammadu Buhari as Nigeria’s next president in 2023.

Nnamani who is vying for the nation’s top job on the platform of the ruling All Progressives Congress (APC), spoke on Friday, May 20, 2022, when he addressed a coalition of youth delegates and supporters from across the six geo-political zones of Nigeria who came to his Campaign Office in Abuja to express their national solidarity and support to his Presidential aspiration.

Senator Nnamani said he decided to seek the nomination of his party, APC, at the May 29, 2022 Presidential Primary, to provide an effective leadership, if elected president, that would unite the country, deepen her democracy and rebuild the social and economic infrastructure for a sustainable development based on production and fair distribution of opportunities and resources, across the geo-political zones of Nigeria.

He assured that Nigeria, in her present circumstance, require a tested and trusted leader with his kind of democratic pedigree of accomplishments in his previous high office in the country as Senate President, when he stood strong against all overwhelming odds and even to the apparent threats to his person, and defended the country’s fledgling democracy, during the ill-fated ‘Third Term’ gamble.

Senator Nnamani, one of the national leaders of the ruling APC, also reminded his visiting supporters of his presidential quest, stating that every period in the history of Nigeria requires a particular kind of leader. He also stated that in 2015 and in 2019, the country needed President Muhammadu Buhari to steer the nation away from the misdirection of the then ruling Peoples Democratic Party (PDP), but in 2023, Nigeria surely needs him to take the country to her next step of national glory.

Nnamani, who was overwhelmed by the unanimous solidarity and support by the large turn out of the pan-Nigerian Coalition which includes Convention delegates of the APC, however, thanked them for their visit. He exhorted them to continue to maintain their faith and confidence in him and in his ability and fitness to lead the country as president, in 2023.

Senator Nnamani pointed out to his coalition support group, that the presidency of Nigeria, at this time, is not about deep pocket or about just making a bid, but about individuals like him who has demonstrated sufficient competence, capability, sincerity of purpose, sacrifices and abiding faith in Nigeria’s ability to function as a united, peaceful, prosperous and progressive country, where opportunities are abound for all her citizens.

The former leader of Nigeria’s federal parliament further hinted that if he becomes Nigeria’s president in 2023, he would be coming to the job in a depressive and sombre moment like in 2005 when he was elected president of the Nigerian Senate and Chairman of the National Assembly.

“Many of you will remember vividly how Nigerians lost faith in the credibility and the mission of the National Assembly. You will also remember that the National Assembly was swept into the maelstrom of corruption and inefficiency before I became the President of the Senate. But soon after, we re-invented the National Assembly and re-invested it with character, competence, and commitment to excellence. I believe that the role of the leader is to solve problems. He can only offer excuses where absolutely necessary, and honestly explain situations appropriately to the electorates. I believe that the President in 2023 should be someone who will take the job seriously to the point of inspiring Nigerians and lifting them to a higher level of performance. I did exactly that as President of the Senate. The profile you need to be President is not just your CV. It is mostly your performance in the last high office that counts.

“I have declared my intention to contest for the 2023 APC Presidential Primary not from a sense of political career or as a form of national drama. This is a serious business. It is about justifying the trust of Nigerians of diverse ethnic and religious orientations who have called on me to avail the nation, once again, the competences, discipline, and character I displayed in the past”, Nnamani declared.

On the issue of presidential zoning, Senator Ken Nnamani, expressed his delight at the current growing consciousness and national consensus in the country, that the next president of Nigeria should come from the Igbo-speaking South East geo-political zone.

He stated that, “I believe that the people of South East owe Nigerians the reciprocal respect of bringing forth the best among them to lead the country. Many South Easterners and other Nigerians, especially my colleagues in the National Assembly, have asked me to avail the Nigerian nation the characteristic honest, competent, and disciplined leadership I offered the Senate”.

Nnamani however said that now that he had heeded the advice and calls by his colleagues and Nigerians, and have formally joined the presidential race, he would count on the support of the delegates of his party, APC, and indeed, the support and prayers of all Nigerians at forthcoming National Convention of his party, to clinch its presidential ticket for the 2023 general elections.

He also urged the support of the media “to help articulate the vision of a new leadership that will deepen democracy, defeat insecurity, and entrench a new culture and structure of productivity that will grow our economy, arrest social anomie and reinvent nationalism and democratic citizenship, even in the midst of global economic and social crises”.

National Leader of the Pan-Nigerian Coalition body, known as ‘Nigerians For Ken Nnamani 2023’, Mallam Abdullahi Yusuf, in his solidarity message on behalf of the Support Organisation, said the Coalition drawn from the diverse tribes and groups from the six geo-political zones of Nigeria, had resolved to pitch their tenth of support with Senator Ken Nnamani on the basis of their conviction that the eminent stateman posseses the requisite cognate qualities and leadership traits that would manage a heterogeneous society as Nigeria with its numerous security, economic, structural and sundry challenges. He noted that the country has not forgotten that when it mattered most and when the nation’s democracy, unity and stability were seemingly under internal threat, Nnamani had offered hope and sanity to the country, as number three citizen, by deploying his statemanly skill and galvanized the federal lawmakers to repel the threat, saved democracy and stabilized the country.

READ ALSO  The Only Thing You Can Do Successfully is Irresponsible Borrowing, PDP Mocks APC

Mallam Yusuf however maintains that Nigeria yearns for Senator Nnamani to emerge as Nigeria’s next president to re-enact similar feat and wield the country together, and also revamp her economy and secure the entire country.

He stated that his coalition group is therefore calling on the delegates of the APC and the leadership of the ruling party, not ensure that the presidency of Nigeria in 2023 is deliberately micro-zoned to the South East geo-political zone, and that one of the best of Nigeria from that zone, Senator Ken Nnamani, emerges an elected or consensus candidate that will fly the presidential flag of the APC in the 2023 polls.

Mallam Yusuf said: “Your Excellency, the large crowd of youths and delegates of our party, APC, who are gathered here today are for you. We are proud of you sir, and we are appreciative of the service you have so far offered this our great country, Nigeria. We are also here today to tell you that we need you to lead this country in 2023, as president. You have shown that you are a moderating factor in our country. We see in you a man who the job (Presidency) needs, and a man who is well prepared for the big task. We are calling on the APC not to look too far for the right candidate because distinguished Senator Ken Nnamani is here already. And we are also calling on the party to ensure justice, equity and fair play and allow the South East Zone to produce you as our next president in 2023, by whatever means – election or by party consensus – Nigeria needs you now.

“We, the Nigerian people of all diverse ethnic and religious spread from the North and South regions, and who are ably represented here, are on your camp as our next president. This country needs a leadership that is tested and trusted, a leadership that is not hypothetical, but practical and verifiable. We, Nigerians are here today to inform you that we accept you and that we offer you our unflinching support in your presidential aspiration”.

ActionAid: Women with Disability Faced with Double Jeopardy in Nigeria

Ogun: Gov. Abidoun will get the ‘Osun Treatment’ in 2023, says Adeleke