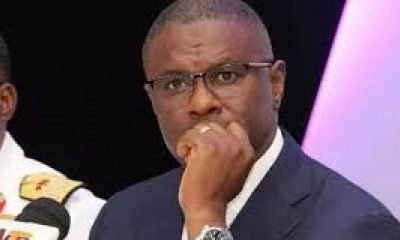 Society is constantly evolving, and nothing is ever constant. This constant change is a feature of human nature and endeavours. The old passes away, the new takes over, and the circle continues. For it is in this eternal change of ‘scene’ that humanity lives forever. In all facets of our existence, humans progress or retrogress to allow for change. This process is catalysed by our dynamic environment, culture, and biology. Even in our most destructive stance, war, strategy, instrumentality, and conceptualisation constantly change to fit the time’s mood, technology, and science. Change, therefore, is inevitable.

The world had a period of global peace until the interregnum of the early 1900s. Between 1914 and 1918, the world witnessed the First World War. It was fought from trenches, supported by artillery and machine guns. For the first time, aeroplanes and poisonous gas were instruments of war. Twenty years later, in 1939, following the rise of Adolf Hitler and German intransigence, the Second World War broke out, but the weapons of warfare changed to the extent that firearms that served in the First World War were almost entirely irrelevant. Nations used nuclear power and missiles, submarines, and tanks heavily. The tools of war changed.

Like in combat wars, weapons of political combat have changed drastically in recent times. Conventional media have always been the primary tool in politics and, for generations, to influence and shape public opinion and perception. Political discourse is transmitted through the media, especially, Television and Radio, to millions who rely on these media for political education. The newspaper was the voice and conscience of the elite and the primary source of political information for the literate in society.

The role of media in politics and power struggle earned them the status of “the fourth estate of the realm”. It is almost as if there is no politics without the media. The media disseminate political information, frames messages, and interpret political events for their audience. However, “the media does not tell people what to think but what to think about”. The traditional media mediates and gatekeeps information to the audience. This gatekeeping function makes the media so powerful that they set agenda for society.

Change has come. Social media is the new kid on the block, and it has radically democratised the public sphere. With one hundred Naira data on your smartphone, you can start a political storm that will have a volcanic impact. Social media is so powerful that any political actor discountenancing them does that at his own peril. Although it has not entirely replaced traditional media as the fulcrum of political activism, it is the melting pot of political debates and the crucibles of political wrestling in recent times.

In Nigeria social media has become very potent as a weapon of politics. Statistically, there were 33 million social media users in Nigeria in January 2021. With a cell phone access figure of over 48% and internet access of 36%, Nigeria’s social media concentration is about 40% of the population, amounting to almost a 90million people. The total registered voter population is 89 million as of 2021. Therefore, most of the voter population has access to social media. That means that social and online media have almost replaced the combined mix of other media as a critical avenue of communication in social and political matters.

Social media can be a force for democratic good and a bulwark against autocracy. It provides political actors with a platform for routine political communication between elections to provide unmediated and direct contact to connect leaders and citizenry and re-energise its political landscape. In line with the global trend, Nigerian politicians have increasingly used social media for routine political communication to link with their supporters directly. Ex-President Goodluck Jonathan, under the supervision of Labaran Maku, then Minister of information, allegedly set up the “40-labtop crew” to influence voter’s choices through the instrumentality of social media.
President Buhari had the Buhari Media Centre, once described by Farooq Kperogi as a Mind Management Centre and interactive platform set up to project the Buhari personae as well as counter the vitriolic attacks of critics of the government he leads.

READ ALSO  The Year 2022! A Peep into the Political Crystal Ball

As we approach 2023, political actors and political parties are jumping on the social media bandwagon, and the landscape of political communication in Nigeria has never been so heterogeneous, fragmented, energetic, chaotic, creative, and equally polarising at the same time. Through regular, humorous, and strategic engagement with audiences on social media, political actors are (re)branding themselves as serious political contenders at both state and national levels. Some of their audiences are savvy and can distinguish between political razzmatazz and genuine political engagement and enlightenment.

Social media has emerged as a pivotal battleground to mould public opinion and set an agenda. The jury is out on the role of social media in influencing political outcomes; however, the potency of social media to affect and determine voting behaviours may be limited but significant. The opposition party [APC] in the 2015 presidential elections used social media a great deal to de-market the PDP.
Exploratory studies done in Nigeria during the 2015 elections indicate that social media played a significant role in turning popular support amongst young voters against the then incumbent federal government. By the 2019 presidential election, social media had come of age, and instead of the dominance of that space by young millennials and young adults, we observed that even older people were relying on social media for political information and political debates.

News and messages quickly go viral with significant consequences. The government hardly controls the social media space, and the open space that results is a marketplace of ideas and opinions. Advocate for or against a political actor, party, and politicians, easily contend to win over people to their side.

Social media afforded activists, whistle-blowers and opposition politicians, whose voices were stifled by the government in power, an opportunity to engage with the people. It became challenging to conceal potential harmful information. As discussed widely, the APC’s massive victory in these elections, in part, lay in the complementarity of its online and offline campaign strategies and its robust grassroots support base and organisational structure.

The ethical implications of using social media in politics are clear. They stand out for new lows in public and political discourse – the pervasiveness of fake news and misinformation and a routine flouting of ethical norms relating to political communication. Social media was filled with fake news, half-truths, and malicious lies from all sides. Sometimes it was difficult to distinguish between fake news and accurate news. Character assassination and dirty language were rife. For example, one of the most prominent fake news in the 2019 election campaigns was that a certain Jibril, a Sudanese impostor, was standing in for President Buhari at public events, which he repeatedly and firmly denied.

Besides, the rise of polarising and divisive content was a defining characteristic in the run-up to the 2019 general elections, with both the APC and the PDP highlighting communal elements in their campaigning, sometimes bordering towards hate speech. Social media enabled a style of populist politics that is combative and personal, allowing hate speech to thrive in unregulated online spaces, particularly in regional languages and within private WhatsApp and Facebook group chats.

While name-calling, fake news, and other types of low-level discourse and unethical political communication have always existed, social media have undoubtedly exacerbated these problems to another level. Observers have lamented how political discourse in the country has plummeted to new lows, with misinformation, insults, and mudslinging becoming common even among seasoned and top political leaders. The routinisation of such political discourse in a social media age, where such messages are manufactured, shared, and replicated among populations with low-to-no levels of critical digital literacy, is undoubtedly problematic.

Apart from ethical dilemmas, social media posts also lend themselves to the tyranny of Artificial Intelligence. Machine learning and extensive data collection have created new opportunities for governments and private companies to mount algorithmic influence operations across states and issues. Such influence activities are increasingly subtle and powerful.
The implication is that the basis for individual judgment, opinions, perceptions, attitudes, and behaviours are influenced by non-human autonomous systems and can be subject to machine manipulation. With inadequate regulatory systems, social media and content curating companies have unlimited capabilities to control what Nigerian youths watch, read, know about, and consider essential.

The consequence is that an unmonitored and unaccountable information-opinion ecosystem forms around the most contentious or hot-button political and social issues. An ecosystem of rumours and untrustworthy information diminishes trust in factual media. When trust in objective media or democratic institutions is reduced, people become more vulnerable to manipulation from malign actors. The opportunity for consensus becomes narrower as the basis for agreement – informed, accurate, and trusted information –diminishes. The EndSARS riot resulted from the tyranny of the social media.

As we tweet, like, upvote, downvote, retweet, and post our way through our interconnected socially and technologically intertwined operating systems, we contribute to a mass trove of data on what we think, when and how we respond to ideas and arguments. Our collective social selves and digitised convictions and sentiments are collected per second, stored, analysed by commercially minded organisations, and made commercially available to anyone who wants them. This may be dangerous in the long run. This phenomenon is forcing the government to consider regulating social media, and the Twitter ban of the Nigerian government is a testament to the government appetite to exercise control over Big Social media platforms.

The advent of social media has changed how politics is being organised and conducted and the nature of political communication in Nigeria. And they have allowed for a diversity of viewpoints and public engagement in a social-public sphere on an unprecedented scale. On the one hand, they have permitted democratising politics and re-energising the political landscape. Conversely , several ethical dilemmas arise with the involvement of political actors in the non- ethical uses of social media, compounded by the proliferation of social media among an essentially digitally illiterate population.

Given the severe implications of unethical political communication in this 2023 election period, political actors need to introspect further and focus on bringing back ethics to the table. As routinised dishonest political communication has grave implications for politics, social cohesion , and national security, we must tackle the issue through a multi-stakeholder approach. Political parties have a crucial role of reining in their proxies and supporters and working with fact- checkers and civil society organisations to put ethical communication principles into practice in a social-media age.
Social Media is a very competitive tool. Millions of political aspirants will jostle for the attention of the same audience. This poses the challenge of creative online crowd sourcing and increases the power of social media influencers. To a considerable extent, the outcome of the 2023 elections may be influenced majorly by social media.

Ortom Throws another Bomb! — APC has taken Nigeria beneath the bottom