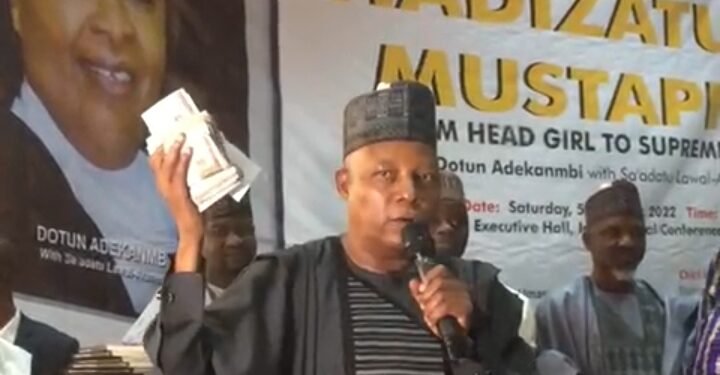 •Unveiling a book on Justice Mustapha

The Boko was written by Mr. Dotun Adekanmbi and Sa’adatu Lawal Ahmed discussing the stages of life and experience of the second woman in Nigeria’s history to attain the rank of Chief Registrar of the Supreme Court of Nigeria.

Speaking at the unveiling ceremony, the former governor of Borno State described Hadiza Mustapha as an example of a woman of courage and focus.

“You are not only the daughter of Borno but a woman who is representing the whole of culture and society across Nigeria. We are proud of you and I am assuring you that the government of Borno state will continue to seek and tap from your wealth of experience to mentor and bring more of Hadizatu like you,” he said.

Also speaking, the Borno deputy governor, Alhaji Usman Kadafur, who represented the state governor, Professor Babagana  Zulum, said telling the story of a woman like Hadizatu will help young and upcoming girls to aspire towards making good the opportunity in life to be better and valuable to the society.

Hadizatu Mustapha, who defied cultural and religious setback to focus on her dream also received encomiums from her colleagues in the legal profession, who described her as an exemplary icon.

The Book which was reviewed by the wife of the Kaduna state governor, Hajiya Asia Ahmed el-Rufai, reveals exciting experiences in the twelve chapters that speaks of her as a child and growing into adulthood.

One of the characters in the book is her long time friend and classmate, who is also her bully in class. Hon. Yusuf Adamu, the current Commissioner, Public Complaints Commission representing Borno state, according to the story, has remained her close reminder of the good old days in early life.

It was revealed that his main reasons for bullying was that Hadizatu always came first in the class beating the boys and never wanted to back down as the top student in the class.

“Sometimes leading to her bicycle tyres being deflated by her scolder, who is now her best friend over 50 years after living primary school,” the reviewer observed.

Over N20 million was said to have been realised at the unveiling of the book.

By Taiye Agbaje   The Supreme Court has dismissed the appeal filed by an energy production and distribution...

11PLC Heads to S’Court over Sale of Lagos Continental Hotel