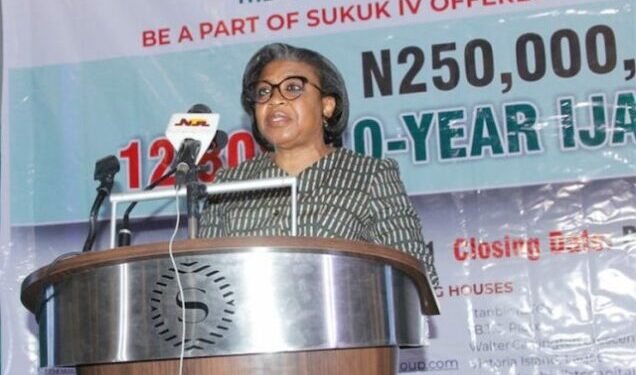 The Director-General of the Debt Management Office (DMO), Patience Oniha, says the over subscribed portion of the N250 billion, 2021 Sovereign Sukuk, which attracted N865 billion, was returned to investors.

Oniha made this known on Thursday, in Abuja, at a ceremony to present cheques to beneficiary-ministries of the Sukuk.

The News Agency of Nigeria (NAN) reports that the sovereign Sukuk, which was issued in December, 2021, was to finance various road projects by three Federal ministries.

They are Federal Ministry of Works and Housing (FMWH), Federal Capital Territory Administration (FCTA) and the Ministry of Niger Delta Affairs (MNDA).

Oniha said that the 2021 Sukuk was part of the Federal Government’s borrowing plan, which was in the budget, and so could not accommodate over subscription.

“Based on all the investor engagements we have done, and the popularity of the Sukuk product, we decided to go for N250 billion and we got N865 billion.

“Sukuk is part of domestic borrowing in the budget; it is not an extra borrowing, so we took only the N250 billion that was available in the budget and returned the rest to investors.

“But we made sure that each investor who bid got something,’’ she said.

Oniha said that the over subscription was an indication that the Sukuk product had become attractive to Nigerians, as a viable instrument for financing road infrastructure that benefits all Nigerians.

“When we raised the money, it goes to the contractors after they have done the job.

“It is one way to energise each party and to tell the contractors that we are in business, and that when they do their jobs their monies are ready.

“The incremental growth, and oversubscription in 2021 are a demonstration of confidence; it means that investors believe in the product,’’ she said.

The Director-General added that, apart from raising funds to finance projects, another important reason for introducing the Sukuk was to promote financial inclusion.

“There are people who will not buy conventional products like the FGN bonds; it brings those various investors into the financial system.

“Let their monies begin to flow into the financial system rather than the informal sector,’’ she said.

Reacting to comments credited to the transportation Minister, Rotimi Amaechi, that the Chinese government was no longer willing to grant Nigeria facilities for infrastructure, Oniha said that the country was diversifying its source of funding.

Meanwhile, the Minister of Finance, Budget and National Planning, Mrs Zainab Ahmed, said that the N250 billion Sukuk fund would be released as part of the capital expenditure in the 2021 budget, which had been extended to March 31.

Ahmed assured that the Federal Government would continue to prioritise spending on infrastructure, in order to sustain the growth momentum of the Gross Domestic Product (GDP).

“As you may be aware, the GDP is projected to grow by 4.2 per cent in 2022. This can only be possible through steady increase in spending on critical infrastructure,’’ she said.

By METROWATCH Reporter     The Special Adviser to the Edo State Governor on Media Projects,...