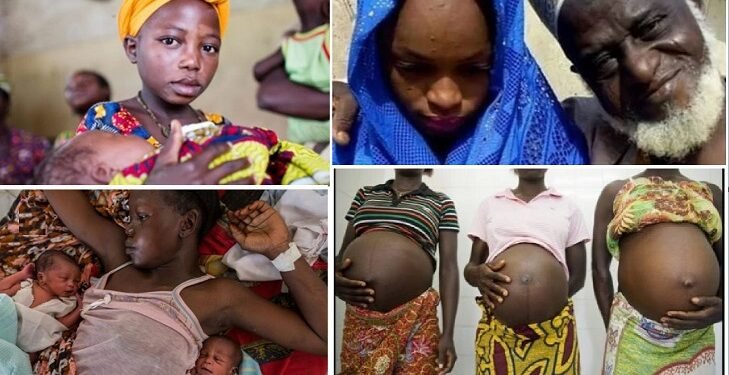 •Child marriage and pregnancy menace in parts of Nigeria

Nigeria’s rates of child marriage are some of the highest on the African continent. Although the federal Child Rights Act (CRA, 2003) prohibits marriage below age 18, the Nigerian constitution contains provisions which appear to conflict with this position. States with Islamic legal systems have also failed to adopt both the federal law and 18 as the age of majority for marriage. Some southern states which have adopted this position have failed to take adequate steps to carry it out.

“It is disturbing that almost two decades after the Child Rights Act was passed, Nigerian girls are still being forced into child marriages,” said Mausi Segun, Africa director at Human Rights Watch. “Nigerian states should urgently act to adopt, implement, and align existing laws with the provisions of the Child Rights Act, which criminalizes marriage before the age of 18 and protects girls’ rights.”

In August and September 2021, Human Rights Watch remotely interviewed 16 married girls between the ages of 14 and 19, and representatives at eight civil society organizations working to end child marriage and gender-based violence in Imo and Kano states. Human Rights Watch selected those states because of their different legal, traditional, and demographic situations that are representative of other states in their regions. Human Rights Watch sent an interview request to the Kano State Ministry of Women’s Affairs and Social Development, and the Imo State Ministry of Women Affairs and Vulnerable Groups but has received no response.

Child marriage contravenes the Nigerian constitution as well as the African Charter on the Rights and Welfare of the Child and United Nations Convention on the Rights of the Child, which affirm 18 as the age of majority, and guarantee a child’s right to be free from coercion and violence, and to get health care and education.

Human Rights Watch found that married girls in Imo and Kano states are denied their fundamental rights to education, a safe dwelling, and freedom from violence, and often do not have access to adequate health care. Without strong regulatory protections for girls, families force them into early marriage for several reasons, including religious and traditional practices and to avoid the social stigma over teen pregnancy

Some girls interviewed said they have tried to escape their forced marriages. One girl married at 14 had run away six times in three years but family members returned her to her husband each time.

Imo State, a predominantly Igbo Christian state in southeastern Nigeria, adopted the Child Rights Law in 2004. But child marriage is an ongoing problem. Girls interviewed said that their families were the main drivers of their marriage, in many cases against their will.

In the Sharia-legislated Kano State, the rates of child marriage are some of the highest in the country. In February, the Kano State Assembly voted to adopt the Child Protection Bill, but Governor Abdullahi Umar Ganduje has yet to assent to it. State legislators should ensure that the final version of the law guarantees adequate protections for girls, including recognizing 18 years as the age of majority as set out in African regional and international law.

In Kano state, Human Rights Watch found that families often plan marriages for girls without providing any choice over when or whom they marry. Girls and young women said that the decision about their marriage was based on traditional practices and family poverty. In many Sharia-legislated states in Nigeria, child marriage is justified on religious and traditional grounds, with the age of adulthood based on puberty. Child marriage is also reinforced by unequal gender roles. Girls have very little access to decision-making power, bodily autonomy, or rights.

While some families also sought to lessen their financial burdens by marrying their daughters off, married girls said that their economic conditions worsened after marriage and that they were poor and didn’t have enough food. Most either did not attend school or were pulled out of school due to poverty and pressure to marry. They often lacked the ability to make decisions related to finances within their households and had most of the burden for household care and work. In some cases, their husbands prevented them from taking on sustained paid employment.

READ ALSO  Divorce-seeking Woman: My Husband Wants to Kill Me with Too Much Sex

There is an urgent need for Nigeria to harmonize its laws to conform to international legal standards to protect children from marriage, Human Rights Watch found. The Child Rights Act should be adopted and put into practice by all states. The federal government and state authorities that have adopted the law should create a strong action plan to ensure effective implementation of legislation and sanction noncompliance.

“The plight of girls and young women in Imo and Kano states highlights the broader issues involved in ending child marriage throughout Nigeria,” Segun said. “All states across Nigeria should strengthen laws and create effective systems to enforce them to guarantee the well-being and safety of Nigeria’s girls.”