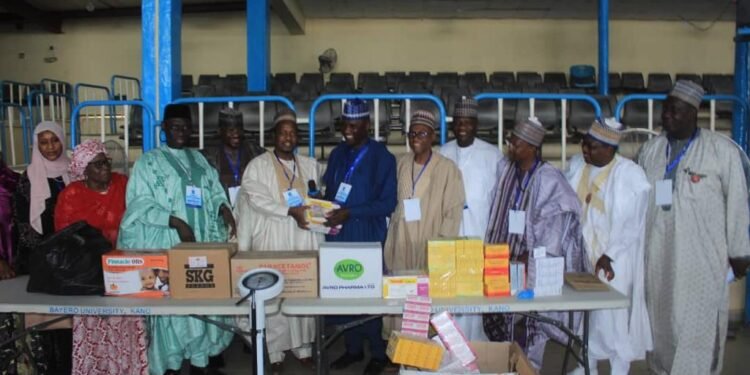 •Donations of essential drugs, hospital disposables and the sum of #500,000.00 endowment fund to the representative of Vice Chancellor Bayero University Kano Prof Haruna Musa as our modest contribution to the development of our Alma Mater. Congratulations class '91.

The Alumni Association of the Class of 1991 of the Bayero University Kano has initiated an Endowment Fund and donated medication to the University.

The initiation of the of the Endowment Fund and presentation of the medication worth one million naira were parts of the activities marking the Association’s 30th Reunion and general meeting which took place on Saturday 1st January 2022 at the Convocation ground of Bayero University, Kano.

Presenting the medication and cash sum of  N500,000 and the medication to the Vice Chancellor of the University, the Chairman of Interim Committee of the Association, Alhaji Sunusi Garba Abdullahi stated that BUK Class 1991 Alumni Association was making the presentation of the medication and setting up of the endowment fund as part of their contribution to the development of the University which had given so much knowledge and experience that made them to accomplish so much in life and respective careers.

He said that the association is providing the seed money for the take up of the endowment fund and will be contributing similar amount annually to sustain the project.

He then called on other class chapters to key into the project by donating at least half a million Naira into the fund annually in order enhance the institution’s financial capacity in catering to the academic and welfare development of students.

Receiving the money and the medication on behalf of the Vice Chancellor, the DVC Academic Professor Haruna Musa Danbatta commended the Chapter for the initiative which he said was the first in the history of the University.

While assuring judicious of the funds, Professor Danbatta called on other class chapter to key into the programme for the development of University.

Handing over the items to the Permanent Secretary of the Ministry for Women Affairs, the Chairman Sunusi Garba Abdullah said the gesture was part of the group modest contribution for the welfare of the less privileged in the society.

He said the visit to the torry was not only to make the donation but to understand the challenges of place for the group continuous support.

Responding the Permanent Secretary Hajiya Amina Aminu expressed government appreciation for the gesture and implored others to emulated the group.

In a related development, the BUK 91 Alumni Association has also inaugurated and interim caretaker committee and also set up 3 special committees towards harnessing individual member’s resources for contribution towards the development of our society.

Other activities marking the 30th reunion of the BUK 91 Alumni Association were a courtesy call on the Emirs of Rano and Kano, lectures on personal health and retirement, as well as, Gala Night.

The three days reunion was attended by various members of the association from different parts of the country and other parts of the world from various fields of endeavours.

Buhari Flies to Senegal Tuesday for Confab on Agriculture

By Babalola Seyi   The President Muhammadu Buhari will leave Lagos on Tuesday for Dakar, Senegal, to attend the second...

OPINION | Nigeria: How Much Longer Shall it Take to Reach the Promised Land?, By Clement Uwayah

OPINION | The Citizens’ Loyalty and National Rebirth By Clement Uwayah

I was sexually abused by my nanny, raped – BBNAIJA Bambam

2023 presidency: Only rigging can stop Obi from winning -Ex-Anambra gov