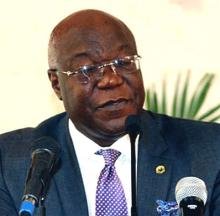 Former President Olusegun Obasanjo and his wife will lead other dignitaries within and outside Nigeria to attend the bi-annual symposium dedicated to the memory of late former Vice Chancellor of the University of Lagos, Ibidapo Obe

A statement by Dimeji Kayode-Adedeji, cousin of late Oye Ibidapo-Obe, said Obasanjo had made commitment to attend, in a letter sent to the family of the late university don who was also, founding Vice Chancellor of Federal University, Ebonyi State and Founding Chairman of Council, First Technical University, Ibadan, Oyo State.

The statement added that the ceremony is scheduled to hold on January 7, 2022 with the theme, Viewing The World Through the Lens of Big Data’, with Vice Chancellor of University of Lagos, Professor Toyin Ogundipe as the Chief Host.

The first session of the programme is to hold between 10am-12.30pm, with welcome address and introductions by Professor Rahmon Ade Bello, who is the event Chairman and former Vice Chancellor, University of Lagos.

The session will also attract presentation by Professor Deji Badiru on the topic,’ Data analytics and Systems Engineering’ and Professor David Olowokere addressing the topic, ‘Big Data and Changing Landscape of Science’, as well as Professor Kunle Kehinde speaking on ‘Machine Learning: A New Framework for Accelerating Scientific Discovery’

The second session which is ceremonial will see Akinbambo Ibidapo-Obe, son of the deceased presenting a welcome address, while the former President Olusegun Obasanjo will serve as Chairman and deliver topic themed, ‘On the Assessing and Improving of accuracy of Nigerian Population and Demographic Data’

The keynote address will be delivered Dr. Jim Ovia and handled the topic, ’Using the Lens of Data for a Renewed Global Economic Evolution (Banking and Big Data)while Professor Ayo Ogunye will oversee the Proclamation of the Establishment of Oye Ibidapo-Obe Endowed Chair in Engineering at University of Lagos.

In a related development on January 3,2022, there will be dedication of Professor Oye Ibidapo-Obe Memorial Anglican Church, Diocese of Ilesa, South-West, located along Osogbo road, Ilesa in Osun State.

Meanwhile, it is recalled that, the former Vice Chancellor of University of Lagos

‘My Job is Done’: Obasanjo Gives up Seat for Peter Obi at Event

Former President Olusegun Obasanjo was the centre of attraction at an event after he offered his seat to Labour Party’s...

Obasanjo: I didn’t say ‘go to Bourdillon for Thoroughbred Politician’

Wike opens up on London Meeting with Atiku, Obi, Tinubu and Obasanjo