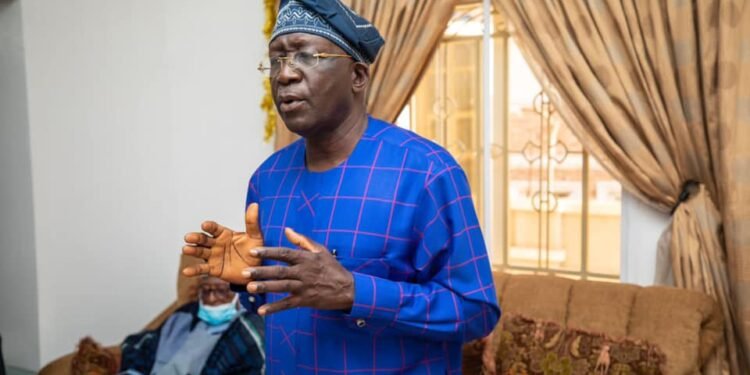 The Peoples Democratic Party (PDP) National Chairman, Sen. Iyorcha Ayu, has cautioned party members not to work against the party, saying whoever does that will face the consequence.

Ayu stated this at the party National Working Committee (NWC) reconciliation meeting with the party stakeholders from Ekiti State on Monday in Abuja.

He said that PDP had been loosing elections because party leaders and followers had been fighting one another, adding that such a situation must stop.

“So, you have a responsibility to support him. Anybody that does otherwise will be considered as working against the PDP. It will be regarded as anti-party.

“The mood of the PDP today is that anybody who works against the PDP will not just walk away because we do not want members of our party fighting against members of the party.

“We lost election because the leaders in various states and the followership were divided, with PDP winning or losing against PDP. That trend has to stop.

“We are very certain that the reconciliation process which we are going to carry out in virtually every state will enable us to unify the party at the ward, local government and state levels.

“We believe that as a family, as a party today, that no single individual can go out there and win an election, even if you are a governor.

“The governors must work with their colleagues, critical stakeholders right from the ward. Every other party leader in every state must be prepared to work as a team player, because party politics is like football, it is not tennis.

“It is only when you work as a team that you are assured of victory,“ Ayu said.

He said that the NWC, at its first meeting, resolved to reconcile members of state chapters, having inter issues in order to have a united and formidable force to go into any election, including the forthcoming presidential election and other national elections in 2023.

Ayu said the reconciliation process the NWC started with Ekiti state, would be extended to other states, as the PDP believed there was a need for dialogue with critical stakeholders to win elections.

“The essence of every political party is to win elections, not just to participate in elections.

“The party started on the note of winning virtually every election that we went into, that was why we built our strength from capturing 21 states in 1999 to about 28 states in 2007.

READ ALSO  Obaseki: No Matter the Persuasion, I’ve No Plans to Dump PDP

“It is often believed that if we put our house in order, we will still be able to go back to those winning ways.”

Ayu said that the mood of the party was that of a party that would fight together as a united force and hopefully recapture as many states as possible, more seats in the National and State Houses of Assemblies.

“We are not going into any election to lose. We are going into every single election with the determination to win and I think that should be the mood of every member of the PDP family.

“It is not important to us in the leadership of the party whether you like a particular candidate or not.”

He said that the reconciliation committee members include nominations from the party Board of Trustees, the National Assembly and  governors.

Others include 17 PDP governorship aspirants for the state election holding in June 2022.

Bishop to ex-Gov Obi: Your Return of Schools to Church is Greatest Legacy Project