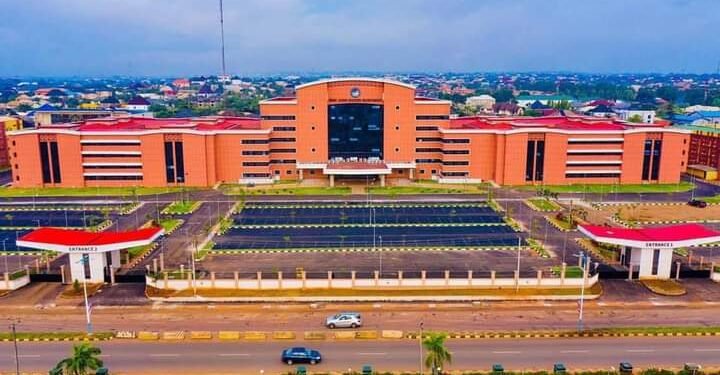 The Governor of Delta State, Ifeanyi Okowa, on Monday inaugurated the newly completed multi-billion naira State Secretariat Complex, which was named after the Asagba of Asaba, Professor Chike Edozien.

This was announced by the Special Assistant on Media to the Governor, Ossai Success, who also stated that the project, alongside a 8.5 Megawatts Independent Power Project was inaugurated by Vice President Osinbajo.

The ceremony was also attended by the Governor of Bayelsa State Diri Douye and the Deputy Governor of Edo State, Shaibu Philip.

The statement partly read, “The secretariat complex is named after Asagba of Asaba, His Royal Majesty, Professor Chike Edozien.

“The Vice President also paid a visit to the Asagba of Asaba, His Royal Majesty, Professor Chike Edozien.”

Speaking about the inauguration, Okowa said, “When I was campaigning to become the Governor of Delta State, I promised that I would do everything to reduce the cost of governing our state.

“With the 27 ministries spread across several locations, we were running an inefficient system.

“This is why, four years ago, we began the process of building a state secretariat that would be able to house all our ministries and their staff to cut down on the cost of operating several different facilities.

“Today, with the commissioning of the new 45,000 square meters Professor Chike Edozien Secretariat, we have kept our promise to the people of Delta State by streamlining the activities of our state’s civil service under one sustainable structure.”

Ahead of the 2023 presidential election, top members of the main opposition Peoples Democratic Party (PDP), are gearing up to...

Buhari: We Must Not See 2023 Elections as Do-or-die Affair