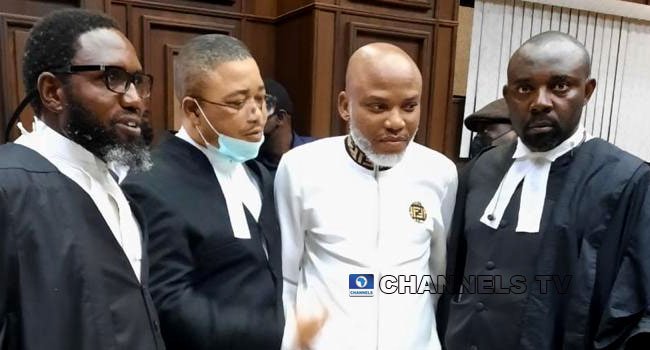 •Nnamdi Kanu and his counsel ...in court

The Northern Elders Forum, NEF, has urged President Muhammadu Buhari to reject the request of some notable Igbo leaders to release leader of the proscribed Indigenous People of Biafra, IPOB, Mazi Nnamdi Kanu.

The Forum stated that there were neither a safe, constructive nor informed grounds for granting the request, and advised the President not to delay in announcing that the judicial process in the case of Kanu would be allowed to run its course.

The Northern elders said this in a statement signed by NEF’s Director, Publicity and Advocacy, Dr. Hakeem Baba-Ahmed, in Abuja.

Recall that Igbo leaders, led by First Republic parliamentarian and former Minister of Aviation, 93-year-old Mbazulike Amaechi, had described the situation in the South-East as “painful and pathetic,” lamenting that businesses had collapsed, while education was crumbling amid fears.

Amaechi also promised that if Kanu was released, they would ensure that “he (Kanu) no longer say the things he had been saying.”

But NEF argued that granting the request of the Igbo leaders would do serious injury to the country’s integrity.

He said: “Northern Elders Forum has carefully studied the request of Igbo Elders for President Muhammadu Buhari to terminate the trial of Nnamdi Kanu and release him unconditionally.

“It has also noted President Buhari’s response which both raised very weighty issues related to the request, and his commitment to consider it.

“The Forum notes that there are no safe, constructive or informed grounds for granting the request, and advises that President Buhari will do serious injury to a country already threatened by multiple challenges to its security and territorial integrity, if he delays announcing the only responsible response, which is that the judicial process in the case of Kanu must be allowed to run its course.”

The Northern elders also noted the judicial decision to label bandits and kidnappers as terrorists, and cautioned against a blanket profiling and targeting of all Fulanis.

The Forum also advised that the National census planned for 2022 should be postponed until after the 2023 elections.

Buhari for global conference on agric in Senegal