Plateau to Partner with Agric Experts for Enhanced Food Production 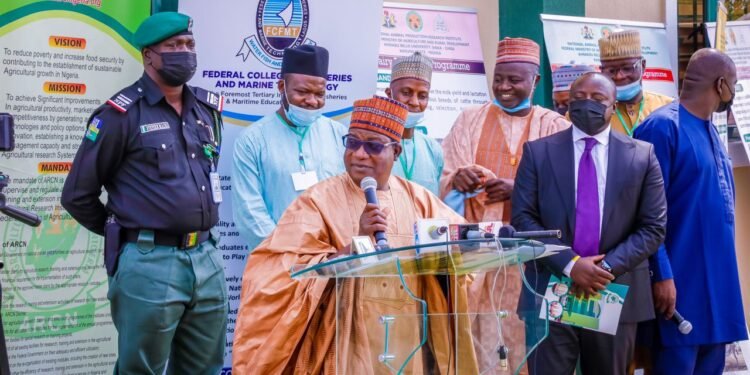 Plateau State Governor Simon Lalong has expressed the readiness of the State Government to partner with the Agricultural Research Institute of Nigeria (ARCN) in utilizing research findings to improve the production capacity of its farmers.

The Governor made the pronouncement while speaking at the commissioning of an e-library, agric museum, radio and television stations as well as the foundation laying for the new administrative office for the ARCN in Abuja.

Lalong said the initiative by the Agency will go a long way in filling the gap between farmers and agricultural managers in terms of information and knowledge sharing on new farming practices, improved varieties of seeds as well as modern methods of farming using technology.

He commended the Executive Secretary of the ARCN Prof. Garba Sharubutu for his innovative approach since he assumed duties and said he was not surprised by his achievements seeing that he did a lot to make agriculture viable in Plateau State while serving as Special Adviser before his appointment by President Muhammadu Buhari.

He said with 4 Research Institutes and 2 out stations located in Plateau State, there have been so many agro gains which resulted in the recent hosting of the International Summit on potato and the flagging off of dry season wheat farming in Nigeria.

Minister of Agriculture and rural development Dr. Muhammad Mahmood Abubakar said the initiatives by the ARCN were part of implementing directives of President Buhari for Nigeria to leverage on its potentials in the agricultural sector for national development.

He challenged the Institute to push through with all the research activities and ensure that the findings are disseminated to the farmers at the grassroots for transformation in food production.

Chairman Senate Committee on Agriculture Abdullahi Adamu and Senate Deputy Chief Whip Senator Sabi Abdullahi expressed the determination of the National Assembly to ensure that the programmes and projects of the ARCN succeed because of the significance of research in every endeavour particularly agriculture.

Sharubutu further said the organisation under his leadership will continue to do its best to come up with quality research that will be utilized in the field and not just ending up on the shelves of researchers.

This he said was why the institute came up with the idea of the library, museum and broadcast stations to properly disseminate the outcome of research and get feedback from farmers and other members of the public.

He commended Governor Lalong for his support adding that the ARCN will not relent in partnering with the Plateau State government to boost agriculture and harness all the untapped potentials.

Gov Simon Lalong: Setting the Template of Unity in Diversity, By Yakubu Dati

"A leader is best when people barely know he exists, when his work is done, his aim fulfilled, they will...