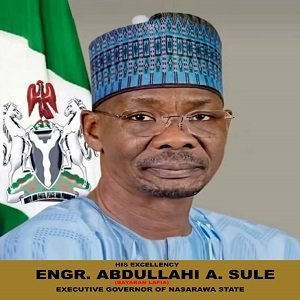 Nasarawa State Governor, Abdullai Sule, said he never wanted to venture into politics because he believed politicians were bunch of dishonest people.

Sule, who spoke on Tuesday at the opening of the 4th Nigerian Diaspora Investment Summit 2021 organised by Nigeria Diaspora Summit Initiative (NDIS) and Nigerian in Diaspora Commission (NiDCOM), with the theme “ Diaspora partnership and Linkages for post-Covid Economic Growth”, however said he ventured into politics when he saw President Muhammadu Buhari, who was seen by everyone as a symbol of honesty and incorruptibility.

The governor, said his initial notion was to stay clear of politics as politicians were not honest enough, but that changed after he watched a video about Buhari, an incorruptible man coming into politics.

Sule equally said his interest was further reinforced by the message in an advert that says politics should not be left for bad people.

He told the gathering mostly of Nigerians living in the Diaspora that: “I am actually one of you. Went to school in Indiana, USA and I moved to Chicago and then Texas where I had most of my working life.

“When I made the decision to leave the oil and gas sector in the US and return to Nigeria, at the time we came, we set up a company and I knew how difficult it is to set up an institution in Nigeria.

“I didn’t leave the US to come to Nigeria to become a governor. As a matter of fact, I hated politics. I thought politicians were not honest enough for me to join politics.

“That was my idea until I saw that video where El-Rufai said, “if good people say we are not interested in politics, at the end of the day, those that are going to go in are the bad people and they are the people to be our leaders.

“What do you say about president Muhammadu Buhari, an incorruptible individual in Nigeria, who had decided to go into politics.

“If he says he is not going into politics because it is bad, how are we going to get somebody like Muhammadu Buhari. So I took a challenge from that kind of video and here I am.”

On the investment front, Sule said Nasarawa state remains an investment destination because of its proximity to the Federal capital City; “is fortunate to have the longest boundary with the federal capital.”

He also explained that the state has the market and so it is the right place to invest as Nigerians in the diaspora move away from remittance to investment.

“You know a lot of us spend so much time remitting funds to people back home and a lot of these people don’t know how hard Nigerians actually work, When you go to the medical centre in Houston and see Nigerians, doctors working as nurses and some driving taxes.

“Nigerians do so much to survive and we send that money to Nigeria and sometimes we don’t know where that money is going into and it is very painful. So it is time for Nigerians to start deviating from that angle of doing things down to this direction of investment and there are several areas to invest in.”

Also speaking at the event, the Vice President, Prof. Yemi Osinbajo said the recovering the economy of the nation cannot be achieved by the government alone; insisting that: “We need the partnership and deep involvement of the Diaspora and foreign investors, among others, investing in local businesses to boost and diversify the economy. It is this realization that has driven this Administration’s support for the NDIS as a clarion call to our Diaspora and their friends to come and invest in a land of boundless opportunities and possibilities like the Chinese, Indians, Lebanese, Israelis and South Africans are already and successfully doing here in Nigeria.”

The Vice President who was represented by the Secretary to the Government of the Federation, Boss Mustapha said: “Last year witnessed a number of Diaspora investors heeding that call and it is encouraging to note that even more have turned up this year.

“We assure you of our commitment to ensure that your investments are not only secure but that you get a good rate of return on the investments you make, while basking in the glow of being contributors to the growth of business and development of the nation.”

He promised that: “We remain steadfast in our goal of diversifying the economic resource base of the nation and so seek to activate and encourage multifarious investment options.

“The Nigerian Diaspora, who are not only familiar with the investment terrain, understand the risks and have personal interest and stake in the future of this country, but have also been acclaimed as one of the largest, brightest and most enigmatic Diaspora group in the world, are clearly a desired and desirable base to rely on and partner with in boosting our Foreign Direct Investment (FDI) for development.”

He said: “We look to your emotional and logical connections with this great land of ours with which you have chosen to maintain links and your clear recognition of the abundant economic possibilities inherent in investing in its growth and development.

“We invite you to continue to explore ways and means of leveraging activities such as the Nigeria Diaspora Investment Summit to not only expand your wealth but also develop a nation you wish to come back to.”