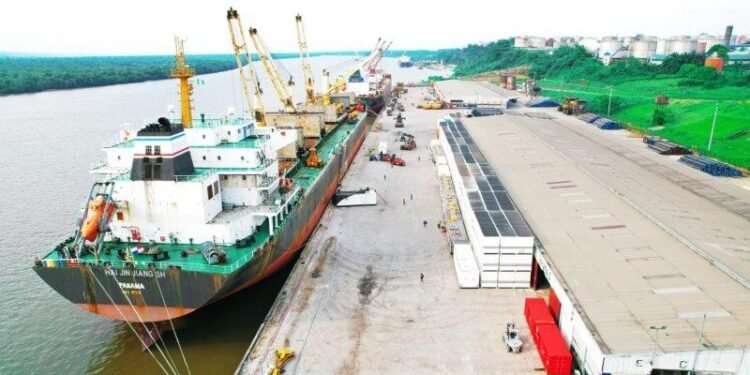 The concerted efforts of the Mohammed Bello Koko-led management of the Nigerian Ports Authority (NPA) at growing the fortunes of the Eastern Ports of Calabar, Warri and Onne has continued to yield dividends as Calabar Port Complex received its largest tonnage of a Single General Cargo Vessel.
The vessel MV HAI JIN JIANG SH with International Maritime Organization (IMO) No: 9579729 carrying gross tonnage of 32,390 arrived Calabar Port on Sunday 27th November, 2022 with a General Cargo of 47,129 metric tons and 26 heavy duty trucks.
This is coming on the heels of the reception on September 24th, 2022 of MV Yong Jin, with LOA of 190 metres carrying about 11,800 metric tons of general cargo, comprising 107 heavy-duty trucks, buses, and pipes, among others.
It will be recalled that the Managing Director NPA, Mohammed Bello Koko, had in the course of his tour of the Eastern Ports earlier this year said: “Our resolve to drive up vessel traffic in all the Eastern Ports is no fluke and we have given all the Port Managers the Management backing to churn out and implement initiatives geared towards this goal”.
Tags: Calabar PortNPANPA MD

In the past two years, in a desperate bid to defame and extort me, some faceless individuals under the...

26 Ships with Petroleum Products, Others set to Arrive Lagos Ports