Tinubu in Yenagoa, Accuses ex-Gov Sylva, Others of ‘Stealing away’ Bayelsa State 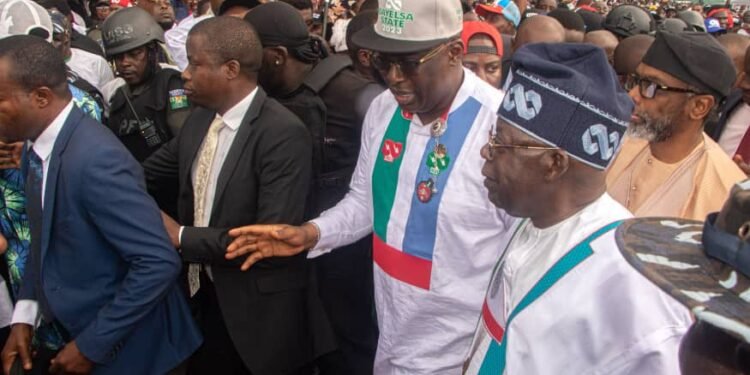 By METROWATCH Reporter
All Progressives Congress Presidential Candidate Asiwaju Bola Ahmed Tinubu has promised to make Bayelsa State what it truly should be: one of the nation’s largest producers of oil, if he becomes president.

Asíwájú Tinubu who was speaking at the party’s presidential rally on Thursday at Oxbow Lake Pavilion Swalli in Yenagoa, Bayelsa State capital, accused those who have governed the state in the times past of stealing away the future of her citizens while under-developing them.

He said the state holds an important position in Nigeria, being one of the major suppliers of the nation’s wealth.
According to the APC candidate, not only is Bayelsa State blessed with mineral resources, it is also blessed with notable individuals.
He was accompanied to the rally by House of Representatives Speaker, Hon. Femi Gbajabiamila, Presidential Running mate, Senator Kashim Shettima, Deputy National Chairman, South, Barrister Emma Enekwu representing the party’s National Chairman, Director-General of the Tinubu/Shettima campaigns and Plateau State  Governor, Hon. Simon Bako Lalong, and former governor of the state and Minister of State for Petroleum, Chief Timipre Sylva.
Others at the rally were the former governor of Edo State and Deputy Director-General of the campaign, Comrade Adams Oshiomhole, former governor-elect of Bayelsa State, Mr. David Lyon, members of the party’s National Working Committee and National Assembly members.
Tinubu said: “This state is home to proud and vibrant people. Although this is a small land mass, Bayelsa has been blessed with abundant human and natural resources.
“With that blessing, your state has been asked to carry a great and long national duty. You all have given so much to the development of this nation. Nigeria would not be Nigeria without your human and material contribution.
“On behalf of the entire nation, may I say thank you Bayelsa for all that you have done for Nigeria.
“You have played a critical and leading role in the development of our national economy.
“Now, I am a man of fair play. I believe a person, a state and even a nation should be repaid for the good and positive things they have done.
“It is high time that Bayelsa is duly acknowledged for its role in national development and even more fairly paid back in kind for that positive role.
“The entire world knows that Bayelsa is rich in oil and is among Nigeria’s largest producing states. The revenue from these things have been the backbone of government income and foreign exchange earnings.
“But what the world often forgets is that Bayelsa is more than just pipelines and oil installations. It is a community of decent and good people, proud of the culture and traditions, yet hopeful of what the future holds.
“You are fishermen and boat operators of great skill and reputation. You are farmers, businessmen, market woman, teachers, students and professionals in all fields.

“To be frank, those who have governed Bayelsa State have not done as they should.
“In fiscal rankings of all the States, Bayelsa ranked 36th in 2020 and 2021. You have been sold short by those not interested in your welfare,” Tinubu said.

Tinubu promised that the misery of Bayelsa people will end with his administration because he will focus to ensure that the state regains its lost glory and compete favourably with others across the country.
“If you vote for me and my team, that unfair day will surely end. Today, I am here to tell you that renewed hope is also here. I am not here to steal or eat your future but to help you realise it. Development and opportunity are here. Education is here. Good health is here. Security is here.
“We will reconstruct and maintain vital federal roadways such as the Mbiama-Yenegoa-Nembe-Brass highway. We will work with willing and capable private sector partners to build a comprehensive network of swamp bridges that connect swamp settlements with upland areas and the wider world.

“My government will make the safety and security of the people of this state its highest priority. We will take the necessary measures to address security challenges in the waterways by winning the fight against kidnapping, oil theft and piracy in the Niger Delta region.

“No innocent person should have to live in fear simply because they work hard and earn a little money. You should be able to enjoy our life and labour as you wish. No one has the right to steal that from you.
“We will deploy new technologies to protect the safety and security of law-abiding Bayelsans as well as the critical infrastructure in the state.
The effects of environmental degradation and oil spillage will not be ignored,” Tinubu said.
He again used the occasion to list his plans for the entire country from the beginning of his administration in May 2023.
“My vision for Nigeria and Bayelsa are the same — to be a peaceful, prosperous and compassionate society.
“My government will focus on developing the young people of this country because they represent the future. And the future is today.
“We will establish new skills development and capacity building programs. Industrial hubs and dry ports will focus investment on labour intensive manufacturing.
“We will innovate and use modern technology to create jobs and provide first generation goods and services.  Our goal is to expand our industrial base such that Nigeria becomes a global leader.”
The former Lagos State governor also praised former President Goodluck Jonathan, an indigine of Bayelsa for allowing for the smooth transition of power in 2015 after he lost the presidential election and his efforts to foster peace and democracy in West Africa.
Minister of State for Petroleum Sylva said Tinubu is a friend of the Niger Delta people and “the only serious candidate in the presidential race.”
On arrival in Yenagoa, Tinubu and his entourage first paid a courtesy call on the Ibenanaowei of Ikpetiama Kingdom and Chairman, Council of Traditional Rulers in the state, HRM King Bubaraye Dakolo Agada lV.
The traditional ruler reeled out a lot of demands his people would love Tinubu to meet if elected including the construction of major roads linking the state capital,   revamping of Peeremabiri Rice Farm, of Aggeii Deep Sea Port and  Brass LNG.
The APC presidential candidate promised to work to uplift the state as a major oil producer.
But he told the royal fathers present at the palace to urge their people to try voting APC for a difference in the state, while alluding to a Yoruba proverb that literally translates: “a woman that has not experienced a second husband will not know the difference between the two.”
Tags: APCBayelsa StateBOLA TINUBUTimipre Sylva

Peter Obi Blames Insecurity on ‘Lack of Value for Education’