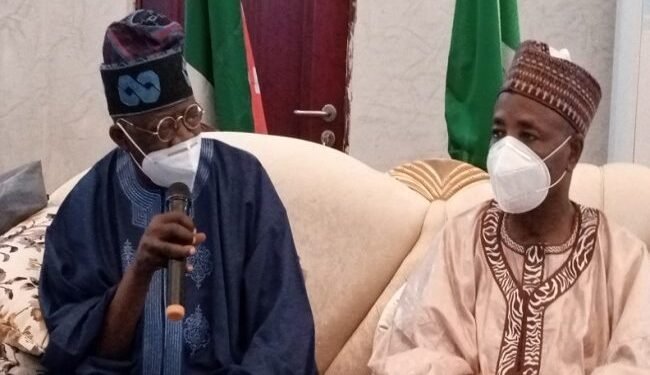 Presidential Candidate of All Progressives Congress (APC), Sen. Bola Tinubu, has commiserated with a former Governor of Sokoto State, Sen. Aliyu Wamakko, over the death of his wife, Hajiya Atik.

Tinubu, in a condolence message issued by his Spokesperson, Mr Tunde Rahman, on Wednesday in Lagos, described the deceased’s death as saddening.

“On behalf of my family, I express my deepest condolences to the former governor of Sokoto State and his family.

“I pray that Allah comforts them at this moment, while beseeching magnificent Allah to forgive Hajiya Atika Wamakko her shortcomings and grant her Alijanna Firdaus,” Tinubu said.

Group Says ‘Tinubu will Not Renege on His promises, if Elected President’

Again, Buhari Jets Out of Nigeria ahead APC Presidential Primaries