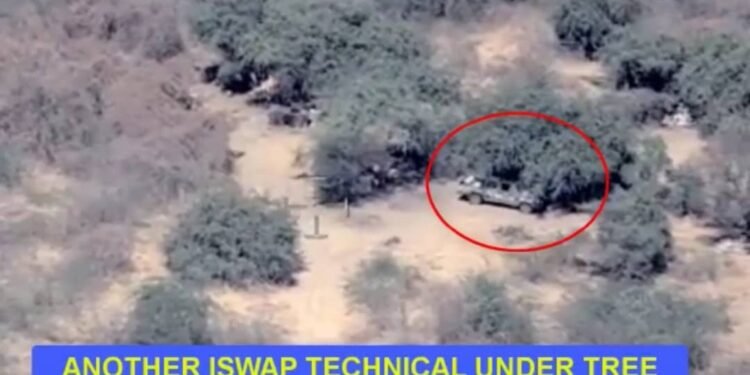 It’s no longer news that the Nigerian Air Force, through its precision firing, has made the ISWAP insurgents to live in their hideouts with the reality of facing each new day with fresh troubles for them.

So it was for them a couple of days ago when the Nigerian Air Force (NAF) pounded the ISWAP insurgents’ camp leaving in it’s trail, a tail of massive destruction.

It would be recalled that following the flooding of the Northern part of the Tumbuns of the Lake chad, Mallam Fatori town and NA troop’s location situated in the town had become flooded thereby limiting their mobility.

For Boko Haram/ISWAP terrorists, the flooding thus provided an opportunity to take advantage of the situation and try their luck in attacking troops’ location with little or no success.

This necessitated the need for several air recce missions in the area to identify and locate the terrorists and their enclaves.

Intelligence revealed that indeed the terrorists were infiltrating into Mallam Fatori from Tumbun Fulani and they had with them four gun trucks, several support weapons and other technicals.

Hence the need for an air interdiction mission to degrade and disrupt their activities.

Accordingly, the strikes on Tumbun Fulani led to the destruction of three of the gun trucks hidden under trees with several terrorists scampering towards 6 boats on the shores of the Lake Chad eliminated as well, thereby degrading their ability to attack own forces.

Similar strikes were conducted on the 27 November 2022 on another terrorists’ location at Tumbun Hamma, one of the identified locations for ISWAP training camps in the Lake Chad Region.

There, about 24 ISWAP terrorists, who were observed to be undergoing weapon handling and Improvised Explosive Devise (IED) training at the location for six consecutive days were struck by NAF aircraft.

The effect of the strike was adjudged very successful and led to degrading of the threats posed by the terrorists.

The efforts of the NAF in protecting NA locations within the Joint Theatres of Operation is a positive development and indicative of the high level of cooperation and synergy currently being observed among the various security agencies.

This bodes well for the entire nation and gives Nigerians a sense of pride and confidence that as long as the security agencies continue to work together, the risks posed by enemies of the State will be greatly curtailed and minimized.

With 500+ Visitors/Sunday, Maiduguri Park and Zoo Has Woken up

Yar’Adua Was an Advocate of Rule of Law, Says PDP in Tribute to Late President