2023: Wike Bans PDP Members from Campaigning for Atiku in Rivers 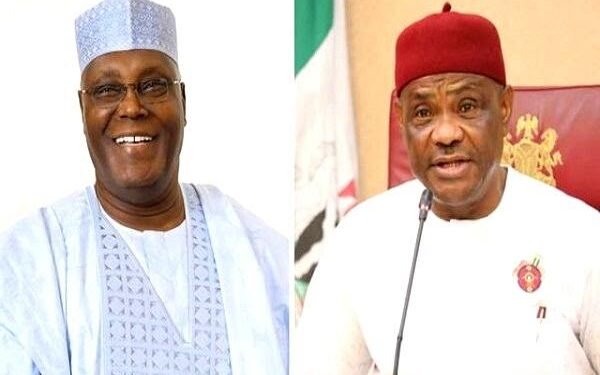 The crisis between the Rivers State Governor, Nyesom Wike, and the presidential candidate of Peoples Democratic Party (PDP), Atiku Abubakar, is far from being over as a former senator representing Rivers South East constituency, Lee Ledogo Maeba, claimed the governor has banned party members from campaigning for its presidential candidate without his approval.

Speaking during an interview on Symfoni TV, Maeba said former governor Celestine Omehia went along with other PDP chieftains like Austin Opara to visit Atiku last Monday at his Abuja residence and apologise to him after Wike accused him of being a liar.

He, however, said on their return, Wike called all of them who had paid a visit to Atiku to reprimand them for visiting the former vice president without his consent.

Maeba said Wike also threatened that anyone who campaigned for Atiku in Rivers State without his permission would be dealt with.

In a swift reaction, PDP state Publicity Secretary, Tambari Gbara challenged Maeba to prove his allegation that Governor Wike issued a threat against anyone campaigning for Atiku in the state.

He said the governor has not given any official statement regarding Maeba’s claims, stressing that it would be proper for him (Maeba) to produce a proof of the alleged threat.

“If governor wants to make that statement, he would make it official, that, in the state, nobody should campaign for Atiku Abubakar.

“Governor Wike is not somebody that hides his feeling. If he wants to say that, I don’t think he would say it privately. So, the person making the allegation should come out and prove himself.

“He (Maeba) should be able to furnish Rivers people and Nigerians with an evidence.”

The spokesman noted that it was common to get such an allegation during political election season and advised that party leaders should be catalysts of peace not discord.

(Adapted from a report by Daily Sun)

Ahead of the 2023 presidential elections, five Governors elected under the platform of the main opposition Peoples Democratic Party, PDP,...

Atiku: Igbos can only be President after my Tenure

Atiku vs Wike: Why I’m Silent over PDP Crisis — Saraki